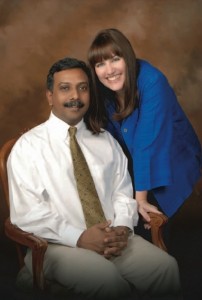 Born the second of six sons in 1963 in Malaysia, John Louis grew up in the small town of Taiping. At 15, he entered an English boarding school in Devon, England, and later studied at the City University, London, during which time he became a member of the London Church of Christ. Upon graduating with an Honours Degree in Mechanical Engineering, he entered the full-time ministry, training to be a minister. It was then that he met his future wife, Karen McDonald, and the two were married in 1987.

John and Karen Louis moved to Singapore shortly after being married in London and officially began the Central Christian Church of Singapore in 1988. They are currently overseeing many affiliated churches in Singapore, Malaysia, Indonesia, Korea, Japan and Mongolia – now known as the South-East Asian Region of Churches (SEA Region) www.seachurches.org

In addition to his pastoral work, John is also founder and president of HOPE worldwide (Singapore), and is a trained family life educator and marriage counsellor. John has been responsible for spearheading many of the HOPE worldwide initiatives in the South-East Asian region, including starting orphanages and free medical clinics in Indonesia and Malaysia, and pioneering Movie Therapy™ in Singapore. John and Karen have conducted conferences, seminars and workshops on marriage and parenting throughout the world.

Both John and Karen hold a Master’s Degree in Counselling from Monash University, and are Professional Members of the American and the Australian Counselling Associations. They are also Registered Counsellors with the Singapore Association for Counselling. As founders of Movie Therapy, John and Karen incorporate the use of use of multi-media in workshops for churches as well as secular organisations, and have trained mariage and parenting educators from around the world. John is a certified Schema Therapist and member of the International Society for Schema Therapy (ISST), having been trained by Dr. Jeffrey Young, the founder of Schema Therapy www.schematherapy.com while Karen is a certified Solution Focused Therapist.

The Louis have two children—a daughter in university and a son in his last year of high school. They love hanging out with their kids, teaching classes in the Singapore church, and spending time with their best friends from around the world. Karen enjoys reading and watching old Agatha Christie murder mysteries, while John has become a nerd in his “old age”, spending his free time researching about marriage and parenting issues!